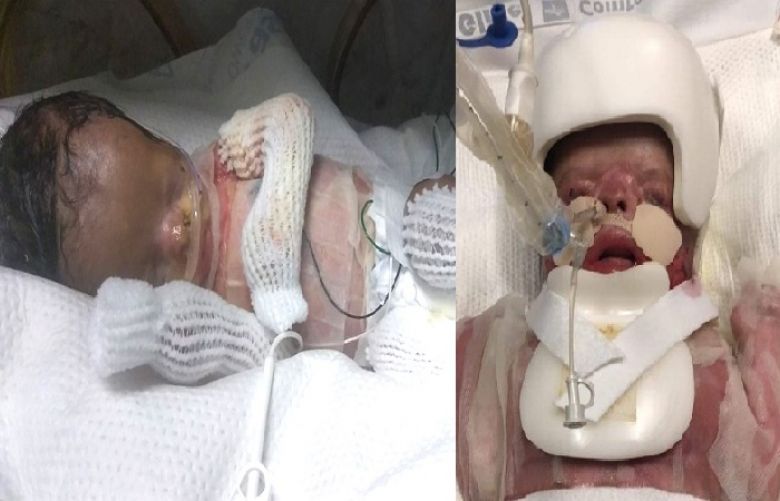 file photo The baby boy has been healing well since skin grafts were applied to his body.

The boy was born with much of his skin missing from his neck down but he's healing with the help of special skin grafts.

At less than 8 months old, Ja’bari Gray has spent his entire life so far in the neonatal intensive care unit of a hospital after being born without skin in most places on his tiny body, including his chest, back, shoulders and arms her mother said that There were serious doubts whether the baby would survive, but he’s doing better now and special skin grafts applied to his body by doctors at Texas Children’s Hospital in Houston are healing well.

Ja’bari has grown from 3 pounds at birth to almost 14 pounds now and seems to be living up to his name, which means “fighter” or “valiant” in Swahili.He was born in San Antonio, Texas, on Jan. 1, 2019, via an emergency cesarean section at 37 weeks into Maldonado’s pregnancy. An ultrasound showed he wasn't gaining weight and his heart rate was dropping.

Maldonado, who has two other children, remembers it was eerily quiet during the delivery and she didn’t hear a baby cry .When her mother was finally able to get a glimpse of the boy in the NICU later that day, Ja’bari was covered in dressings to keep his body protected and moisturized.

He had skin on his head, face and parts of his legs, but it was missing in many other places on his body. He required a breathing tube, pain medication and complex care. His eyes were fused shut and, over time, his chin fused to his chest. Doctors in San Antonio wanted to disconnect him from life support, Maldonado said, but she fought to have him transferred to another facility. Texas Children’s Hospital in Houston was the only one that would take him.

Ja’bari has been there since April. In May, special skin grafts were applied to the baby’s body. The sheets of skin were grown by a biopharmaceutical company in Massachusetts . Cells from a biopsy of skin behind the baby’s ear were sent to the company and then grown in a lab, Maldonado said. Doctors then covered his neck, chest, back and right arm with the grafts.
doctors have been trying to figure out what caused the baby’s condition

There have been few answers. Epidermolysis bullosa a rare genetic condition that causes the skin to be as fragile as butterfly wings  was suspected at one point, but genetic testing of Ja’bari’s parents ruled that out, Maldonado said. His internal organs are fine and the case continues to be a medical mystery.

In May, he underwent surgery to place skin grafts on the exposed wounds of his body. Those wounds are continuing to heal and Ja’bari remains in critical condition.The baby is being weaned off pain medication and there’s hope he can go home  possibly next month  once doctors are ready to remove his breathing tube, Maldonado said he’s doing completely better she noted. But she was still worried about his vision, the condition of his fingers and toes, and other problems.The family is collecting money for medical expenses not covered by their health insurance and costs related to their stay in Houston.