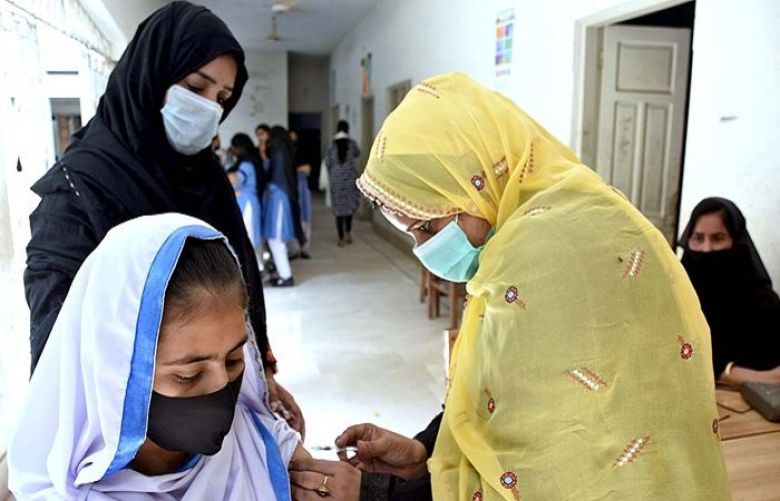 Pakistan approved on Thursday two Chinese vaccines — Sinopharm and Sinovac — for children above 12 years of age, as the country continues its battle against COVID-19.

So far, the country has administered more than 5.5 million vaccines to students between the ages of 12-18 years.

The National Command and Operation Centre (NCOC), in a tweet, said the forum's expert committee had approved administering the vaccines — in addition to Pfizer — to the age group from November 15 onwards.

In a parallel development, NCOC chief Asad Umar said more than half the students between the ages of 12 and 18 had been vaccinated with at least one dose.

"Total students vaccinated so far exceeds 5.5 million. GB leads the way with 68% and Punjab is second with 62%," Umar, who is also the federal minister for planning, development, and special initiatives, said.

Pakistan has so far fully vaccinated more than 46 million people, while 76 million citizens have been partially inoculated. The total inoculations in the country have reached 116 million.

In today's morning session, according to the NCOC's statement, the forum was informed that 1.7 million individuals were vaccinated on November 9, which is the highest number of vaccinations administered in a single day.

The NCOC appreciated the mass vaccination drive, particularly the “Reach Every Door” campaign, and the teams involved in these initiatives.

Meanwhile, in the last 24 hours, the country has reported 637 fresh coronavirus cases and nine deaths, as per NCOC's daily stats.

The total tally of COVID-19 cases has reached 1.27 million, while the death toll has bumped to 28,575, the NCOC website showed.

Moreover, the forum was briefed about the mechanism to carry out necessary COVID-19 protocols and vaccination mechanisms for pedestrians crossing into Pakistan from land borders.

Two days ago, the NCOC had emphasised stepping up the administration of the second dose of COVID-19 vaccine to eligible individuals to sufficiently raise the immunity level of the population for long-term dividends.