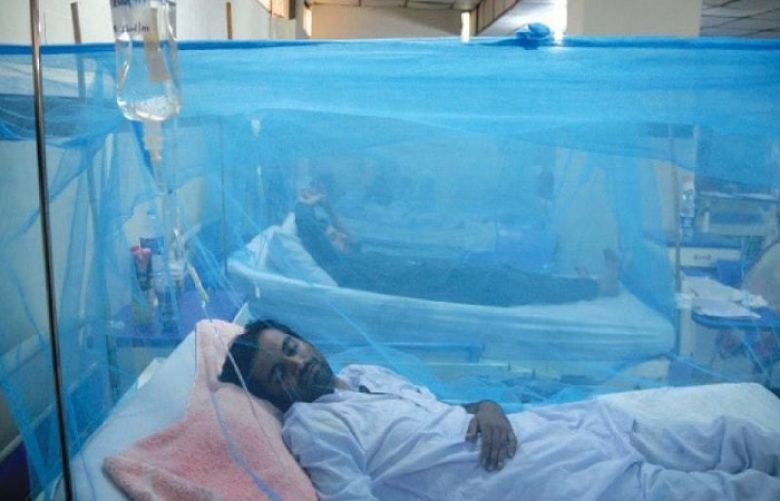 Though the recent rains brought the temperature down to 22°C, there was no let-up in dengue cases as 214 patients surfaced in the twin cities.

Islamabad reported over a 100 cases of dengue fever for the third time in the current season.

According to District Health Officer (DHO) Islamabad Dr Zaeem Zia, 113 people contracted dengue fever - the third highest number of cases in the season. The highest number of patients were reported on Oct 9 when 121 cases were detected, followed by 117 on Oct 7, he added.

Out of the total 113 patients, 78 came from the rural areas and 35 from urban localities, the DHO said, adding that 35 of them were admitted to Federal General Hospital, 15 were in Holy Family Hospital, three each were admitted to Pims and Polyclinic, two each were under treatment in Capital Hospital and DHQ Hospital, one patient was in Benazir Bhutto Hospital while 52 were under treatment in private hospitals.As many as 43 patients came from Tarlai, followed by 13 from Alipur, 10 from Koral, five from Tarnol, three from Bhara Kahu, two from Sohan and one each from Rawat and Jhangi Syedan, Dr Zia said, adding that the total number of dengue patients in the federal capital so far had reached 1,342, with 895 coming from the rural areas and 447 from the urban areas.

The anti-dengue campaign in Bhara Kahu was conducted under the supervision of Assistant Commissioner Secretariat Aneel Saeed.

A total of 101 patients of dengue fever were reported in the three government-run hospitals of Rawalpindi on Tuesday despite a fall in temperature.

The Met Office, however, predicted that breeding of dengue mosquitoes would stop once the temperature falls below 16°C.

In its recent dengue alert, it said dengue fever had deepened its roots and severely impacted the health of people over the last 10 years. This phenomenon occurs especially during the post-monsoon season (Sept 20 till Dec 5) provided the conditions are favourable.

“The dengue triggers during periods when temperature and humidity threshold remain 26-29°C (3-5 weeks) and 60pc respectively. The active period for dengue attacks is two hours after sunrise and two hours before sunset. The breeding stops once the temperature falls below 16°C,” it stated.

Keeping in view the past data analysis as well as the current and future climate outlook, the above mentioned atmospheric variables are providing an ideal environment for a dengue outbreak.

Based on the analysis, the environment will be conducive till October end for dengue spread and it is predicted that it may outbreak particularly in eight major cities - Karachi, Lahore, Peshawar, Rawalpindi, Islamabad, Hyderabad, Faisalabad and Multan till Nov 20.

The doctors in the government-run hospitals were of the view that the number of patients increased in the garrison city and most of them arrived from the cantonment areas.

According to data shared by Rawalpindi district administration, so far 565 patients were reported in Rawalpindi and 1,381 in adjoining Islamabad. There were 3,232 patients in Lahore, 39 in Attock, eight in Chakwal and two in Jhelum.

Out of the total patients reported on Tuesday, 28 were in Holy Family Hospital, 43 in Benazir Bhutto Hospital and 30 in District Headquarters (DHQ) Hospital.

“There are 237 beds allocated for dengue patients in three government-run hospitals, with 150 in Holy Family Hospital, 30 in Benazir Bhutto Hospital and 57 in District Headquarters Hospital,” a senior official said.