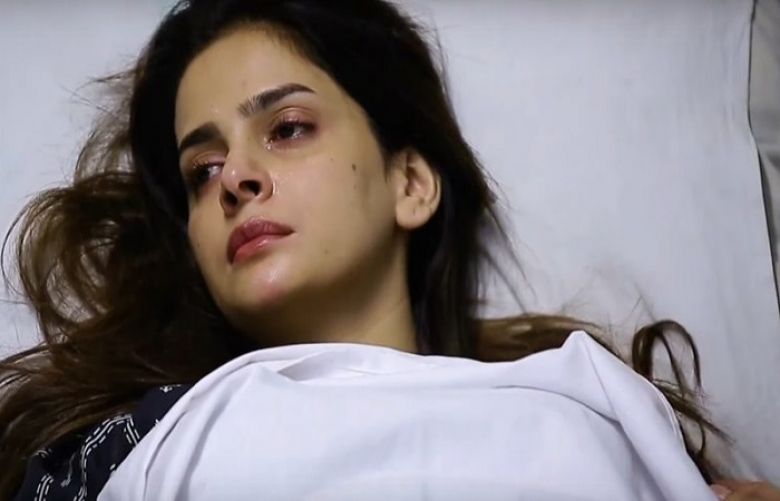 26 episodes in, the only message Zanjabeel Asim’s Cheekh has managed to give us is that if you are a woman in Pakistan, you cannot fight for your or anyone else’s rights; that justice doesn’t exist – and if you happen to somehow get it, you lose everything and everyone in the process.

So basically, if you are a woman, sit down and be quiet.

In the last four episodes, Mannat (Saba Qamar) has not only lost her unborn baby, but her mother and husband too. Wajih’s (Bilal Abbas Khan) lawyer gets his cronies to threaten Mannat’s mother (Gul-e-Rana) so much that she goes to court and testifies that Mannat is actualy crazy, causing the judge to send Mannat to a mental hospital.

She can’t take the guilt of doing that and dies. In the hospital, the doctor is paid off by the lawyer to keep Mannat drugged and told to increase dosage daily. When Shayaan (Emmad Irfani) finds out, he goes to Yawar (Aijaz Aslam), who has no idea what is happening anymore and Wajih has taken over.

Wajih goes to talk to Shayan, the brothers end up fighting and Wajih pushes Shayan, causing his death.

I don’t understand what is going on. There are so many questions and so many holes in this script that it’s hard to believe that not only the actors but the director too agreed to do this drama.

All the doctors in Pakistan seem to have forgotten the vows they took and have no issues forging reports or overdosing a patient due to greed and/or friendship.

The lawyer that Mannat has is so incompetent that he called zero family members to the stand. Why didn’t he call Haya (Azekah Daniel) or Shahwar (Maira Khan) to court and get their statements? They all lived with Mannat and Wajih when the murder took place.

In fact, Shahwar even heard Wajih threaten Mannat and she herself was threatened by him so why didn’t she go to the police after Yawar divorced her?

She showed up at Mannat’s mother’s funeral for support, so wouldn’t it make sense for her to tell at least Shayan what happened? Even Haya has known for a while that Wajih has been lying and through Shariq, she heard Wajih confess so why didn’t she go to Shayaan right after?