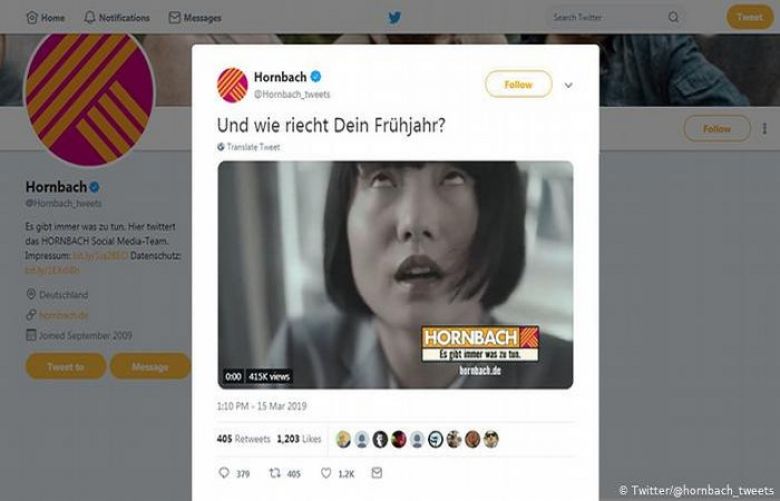 Screenshot from the video

"Racist, disgusting." An advertisement by German DIY store Hornbach prompted outrage for showing an Asian woman getting aroused after smelling dirty clothes worn by white men. But the company isn't backing down.

Hornbach, a German home improvement store, has been called on to apologize over a commercial that social media users decried as promoting stereotypes against Asian women.

The controversial commercial depicts several white men doing garden work. They are then encouraged to remove their sweaty, dirty clothing — including underwear — and place it in a box.

The 46-second advertisement then cuts to a gray city where an Asian woman purchases one of the bags of dirty clothes, opens it up and inhales deeply. The woman then rolls her eyes back and appears to become aroused while a soundtrack of a woman moaning plays in the background.

The commercial ends with a slogan reading: "That's how spring smells."

Social media users slammed the advertisement on Twitter, with one user writing that the ad is "Racist. Sexist. Disgusting."

"The Asian woman is represented as a mere tool to make the white male customers feel better about themselves," wrote Twitter user Sung Un Gang.

By Thursday afternoon, an online petition asking the German company to publicly apologize and remove the ad had garnered over 1,500 signatures.

The advertisement also sparked the hashtag #Ich_wurde_gehornbacht, or "I was Hornbach-ed," with Asian women sharing stories of discrimination and objectification that they experienced in Germany.

Hornbach defended the commercial, replying to users that "our ad is not racist."

"View the ad as a discourse on the increasing urbanization and decreasing quality of life in cities," the company wrote on Twitter.

They also posted GIFs of a white woman and white man opening the bags and having euphoric reactions to smelling the dirty clothes. The short clips were ostensibly also part of the advertising campaign.

Social media users pointed out, however, that the clips of the white man and white woman aren't in the original ad that the company posted. And they have yet to appear in other commercials.