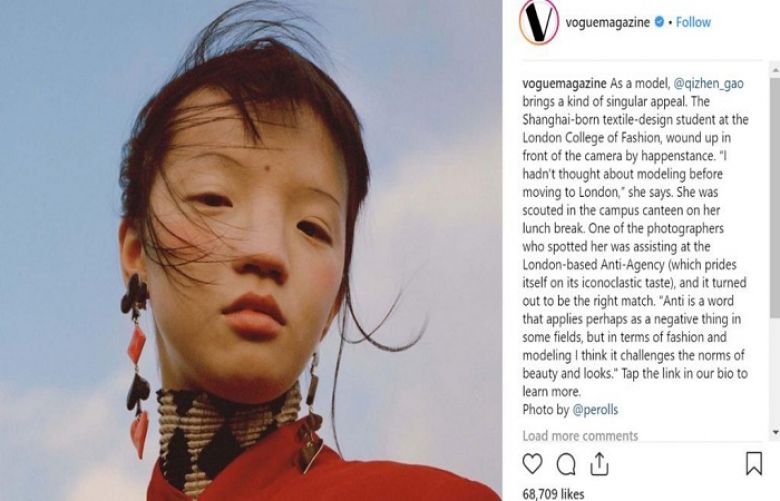 Yet another international fashion company has hurt Chinese feelings this week, this time by featuring a model with a look that is “too stereotypical.”

On its Instagram page, the US fashion magazine Vogue posted an image of Shanghai-born model Gao Qizhen, characterizing her as having a “singular appeal” and describing how she was discovered at the London College of Fashion cafeteria by the “iconoclastic” Anti-Agency.

“Anti is a word that applies perhaps as a negative thing in some fields, but in terms of fashion and modeling I think it challenges the norms of beauty and looks,” Gao is quoted as saying in the post.

However, rather than challenging norms, many Chinese net users have accused Vogue of reinforcing stereotypes by featuring Gao’s face, which they describe rather brutally as “ugly” and “strange.”

“When fashion agencies want to present Western beauty, they choose someone with traditional features, but when they want Asian beauty, they go with someone who looks the most exotic,” reads one netizen’s criticism of the post.

Though a surprising number of the comments on Weibo are negative, others have stood up for Gao, declaring that she really is beautiful and that Vogue obviously doesn’t mean for her to represent all Chinese.

The controversy mirrors in many ways one last month involving Spanish fashion brand Zara last month, which was accused of “uglifying” China with its choice of model. However, in that case, the problem for some was that the Chinese model’s face full of freckles was too unconventional of a look.