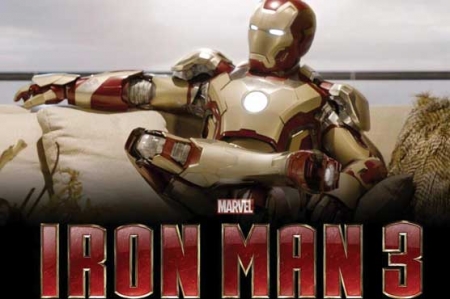 ‘Iron Man 3’ has the second best opening weekend ever at the US box office.

Super-hero blockbuster sequel "Iron Man 3" smashed to the top at the US box office with a mega $175.3 million take -- the second best opening weekend ever -- industry estimates showed Sunday.

The film starring Robert Downey Jr as the title character now sits behind just "The Avengers" -- another Walt Disney comic book superhero flick -- which earned $207.4 million when it opened a year ago.

It "may be the top movie of the summer, unless the Man of Steel " -- an updated take on the ever-popular Superman story set for release in June -- "has anything to say about it.

The US opening of Iron Man 3 demolished the franchise s previous debuts, with $98 million for the first movie and $128 million for the sequel, according to industry tracker Exhibitor Relations.

In second place for this weekend s box office was action-comedy "Pain and Gain," starring Mark Wahlberg and Dwayne "The Rock" Johnson, with $7.6 million in ticket sales, Exhibitor Relations said.

Not far behind was "42," a biopic about trailblazing black baseball star Jackie Robinson, which made $6.2 million

The fourth spot, with $5.8 million, went to "Oblivion," the post-apocalyptic action flick starring Tom Cruise, followed by "The Croods" -- a stone-age cartoon -- in fifth, with $4.2 million.

And in eighth, Walt Disney s 3D fantasy adventure flick "Oz the Great and Powerful" earned $1.8 million, for a nine-week total of $228.6 million.

"Scary Movie 5," the latest installment in the slasher-comedy franchise, took the ninth spot with $1.4 million.

Rounding out the top 10 at $1.3 million was "The Place Beyond the Pines," starring Ryan Gosling and Bradley Cooper in a drama about a motorcycle stunt rider who resorts to bank robbery to provide for his lover and their newborn child.