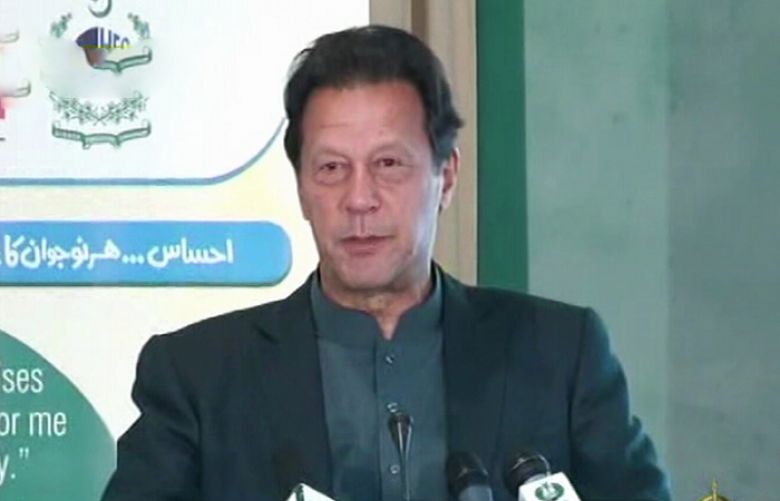 Prime Minister Imran Khan on Monday said that Pakistan's biggest asset is the country's youth, adding that we will only be able to reap the benefits of this by empowering and uplifting them.

The premier expressed these views during the formal launch ceremony for the Ehsaas Undergraduate Scholarship Programme in Islamabad. Imran also handed scholarship letters to a select few students during the ceremony.

The scholarships will provide a total of over 200,000 scholarships to students in the country over four years.

According to the Prime Minister’s Office, the programme is a historic shift in the government’s scholarship policy as in the past, they were handed out to those students who were pursuing higher studies.

Half of the programme's beneficiaries are girls hailing from low income groups while 2 per cent of the scholarships have been reserved for students with special needs.

Addressing the ceremony today, the premier began his speech by saying that a humane society is one which looks after the interests of the underprivileged.

Citing the example of Holy Prophet (PBUH), the premier said: "This is what happened in Madina. The state took responsibility for the poor, even though it was weak. They had no means, and no money but they had ehsaas.

"They understood the importance of empowering the poor," Imran said.

"You have to understand how forward thinking this approach was. This was the reason that for the next few centuries, the world's top scientists were Muslims," he said.

This scholarship programme is following that roadmap, he added. "A small portion of our society [...] receives proper education, and has access to facilities. Meanwhile, there is a separate education system for the common man which does not allow them to move forward in life."

The premier maintained that going forward, empowering all segments of society would be the priority. "This programme is just another step towards achieving that goal [...] it is specifically for those students who don't have the means for higher education.

"You will see an increase in the number of scholarships as well as in the funds for the Higher Education Commission when the country's financial situation improves," the premier vowed.

Talking about his experience with Namal Institute, the prime minister said: "My only reason for establishing that university was because there was unemployment in the area. I thought that by setting up a technical institute, the people would be able to learn skills from which they could earn an income."

Around 75 per cent of the students who come to Namal are from Urdu medium schools, he said, adding that they first have to be taught English. Despite this, 50 to 55 pc of the varsity's graduates take first divisions from the University of Bradford, which Namal is affiliated with, he explained.

"This proves that those children that have the drive to excel and progress in life, [...] students like me who went to good schools cannot compete with such students.

"Therefore, the students that will benefit from the programme will value it. I am certain that these students will also contribute towards the country's progress," he said.

"Our country has been blessed with a multitude of things, but our biggest asset is the country's youth. However, we will only be able to reap the benefits of the youth by educating them, and uplifting them."

Commenting on the initiatives taken by the PTI government, the premier said that the health cards initiative and the shelter homes set up by the government are some of the measures that have been taken to empower the people.

"We are also working towards empowering women in villages. These programmes have been realised through a lot of hard work, and will operate solely on merit, keeping political affiliations aside," he said.

Speaking at a press conference in Islamabad earlier in the day, Special Assistant on Poverty Alleviation and Social Safety Sania Nishtar said the initiative is the country's biggest-ever need-based scholarship programme for undergraduates, reported Radio Pakistan.

According to the PM's aide, 50,000 scholarships will be given each year to the students of 119 public sector universities across the country including Azad Kashmir and Gilgit-Baltistan. A total of 200,000 students will benefit from this programme, the report quoted her as saying.