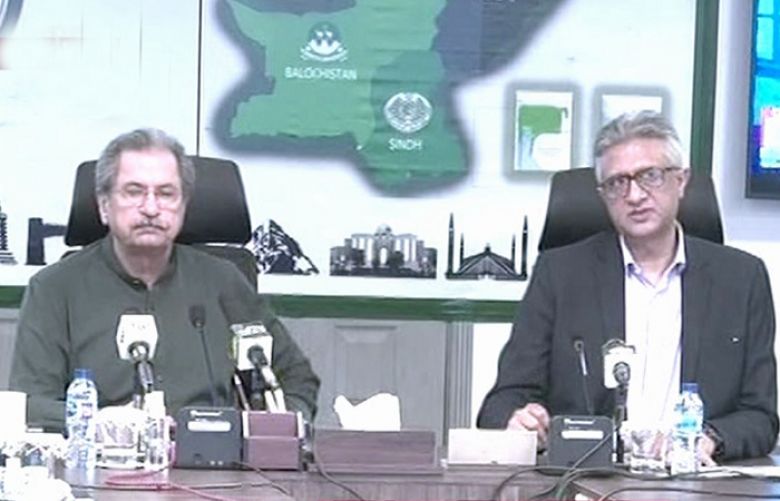 Federal Minister for Education Shafqat Mahmood on Tuesday denied that schools were closed due to a surge in infections, chalking the move up to non-compliance to safety measures.

Mahmood, addressing a press conference in Islamabad alongside Special Assistant to Prime Minister on Health Dr Faisal Sultan, said that a review of the coronavirus situation would be conducted before reopening of primary schools on September 30.

The education minister said that institutions that wish to conduct examinations may go ahead and do so; in light of the statistics, the government will not stop them.

A meeting earlier in the day reviewed the coronavirus situation and it was announced that students from Grades 6-8 will go back to school in Punjab, Khyber Pakhtunkhwa, Balochistan, Azad Jammu Kashmir, and Gilgit-Baltistan from tomorrow.

Sindh, on the other hand, has decided not to reopen schools, despite the infection rate reportedly remaining the same.

"We did not see a significant change after the educational institutions reopened in the country," the premier's aide said.

"The statistic that we look at closely is positivity percentage — the total number of positive cases from tests taken — it has remained under 2% in the month of September," he said, adding that on September 21 it stood at 1.9% and on September 22 it was 1.61%.

In the past week, the change in the number of cases was not significant enough to warrant a delay in the the reopening of schools, he said.

In Sindh, the positivity rate stood at 0.76% and 0.88% in public and private institutes, respectively.

Dr Sultan reiterated the need for people to wear masks, especially in closed areas as it was an important piece of equipment to curb the spread of the virus.