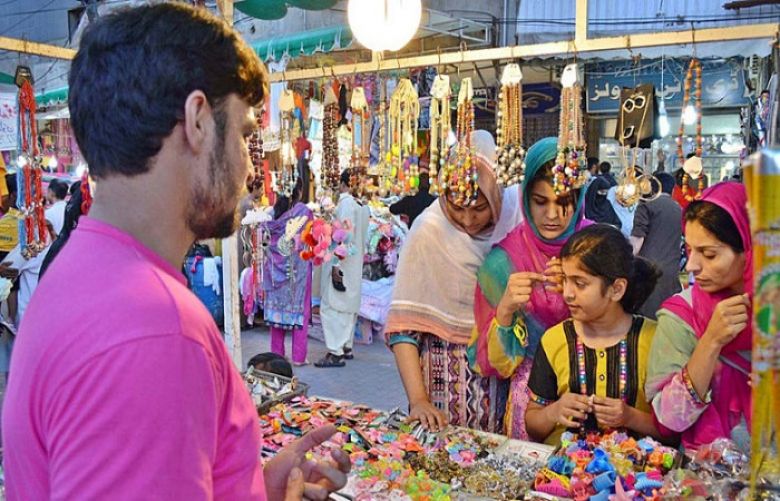 As the coronavirus lockdown took the toll on the country's business community, traders lamented that 70% of the expected Eid sales were lost even though the government eased lockdown restrictions in the last few days of the holidays.

Various traders estimated that the Eid season spending — which usually begins from the mid of Ramadan — fell to Rs7 to 8 billion compared to Rs35 billion last year. The lockdown significantly decreased the buying power of people, they said.

“Eid season shopping/spending this year was less than one-fourth if compared with the last year, as the continuous shutdown of businesses hit the peoples’ buying power,” said Mahmood Hamid, president of the All Pakistan Organisation of Small Traders and Cottage Industries Karachi. “Last year Eid season shopping was around Rs30 billion. Though there are no definite numbers this year, we estimate it at around Rs7 billion.

Hamid hastened to add: “People did visit the markets but they couldn’t spend much”.

Traders said when the markets were opened for the first time after lockdown since March 23, people rushed to buy things as they were out of supplies and goods.

But, the damage had already been done.

“Private companies had either slashed the salaries of their staff or didn’t pay at all, while daily wagers and small businessmen had gone bankrupt, thus denting their buying power capacity,” said Muhammad Bilal, a shopkeeper in Gulshan-e-Iqbal said. “People kept coming to our shops but they were unable to buy much. We mostly sold kids’ stuff.”

Even after the Supreme Court ordered the reopening of malls and markets for seven days a week with Eid just around the corner, the buyers’ response was seen quite lukewarm, traders said.

“The opening of markets and businesses resulted in little economic activity we saw in the last few days,” Hamid added.

The downturn in commercial and trade activity upended the economy’s vital small and medium enterprises sector — which contributes 40% to the country’s GDP, 25% in its export earnings, and 80% in non-agricultural employment.

The nascent e-commerce sector that was expecting its market share to increase in this stay-at-home time couldn’t generally attract diverting sales.

The comments and stats from the online shops could not be made available despite several attempts.

“People only buy some household electronics, certain auto parts and garments online, but an established concept of e-commerce is far away,” said Mir.

Mir said Eid season spending was estimated at around Rs7-8 billion this year, while online sales constituted less than 3% of the volume.

“I believe it would take some 10 years for e-commerce to become just a thing in Pakistan, as it is in the world,” he added. “There are many problems in e-commerce here, and top of the list is lack of buyers’ trust.”

SBP’s annual report on the state of economy 2017/18 showed that sales of local and international e-commerce merchants grew by 94% in 2018 to reach Rs40.1 billion. They were Rs20.7 billion in 2017. Post-paid cash-on-delivery transactions account for 60% of the total value of e-commerce in the country.