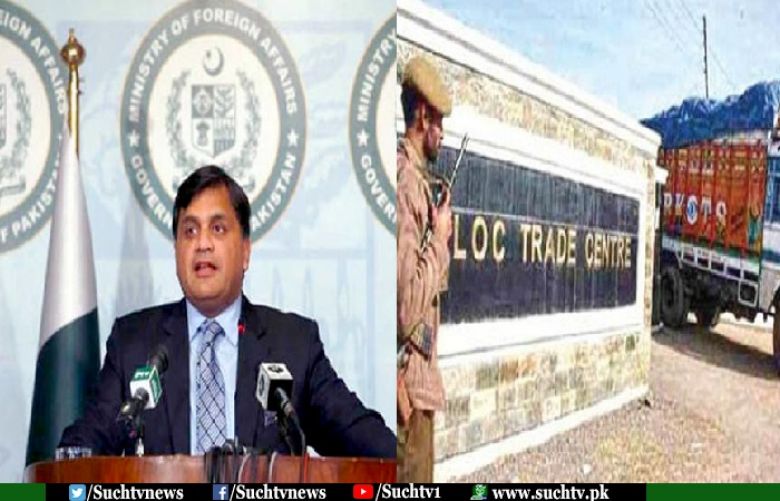 Pakistan has deplored the unilateral Indian decision to suspend cross-LoC trade and rejected the allegations regarding its misuse.

According to Foreign Office spokesperson, the Indian action is based on groundless accusations that this mechanism is being used for smuggling, narcotics, fake currency and terrorism.

This litany is all too familiar and in line with India's frequent attempts to portray legitimate activities of the people in Occupied Jammu & Kashmir as linked to so-called terrorism.

The spokesperson noted that cross-LoC trade has been one of the functional Confidence-Building Measures between the two countries, which came about after arduous diplomatic efforts.

The unilateral suspension of this Kashmir-related CBM indicates that India is seeking to reverse even the modest gains made by the two countries in the diplomatic domain. Its suspension without consulting Pakistan is deeply regrettable.

The spokesperson highlighted that suspension of cross-LoC trade adds to the economic hardship of the divided Kashmiris and further squeezes the segment of people who could modestly benefit from this facility.

He said in our view, there are better ways of dealing with issues relating to implementation than resorting to unilateral suspension of important CBMs.

The FO spokesperson further said that for its part, Pakistan will continue to work for facilitation and enhanced economic interaction among the Kashmiri people, who remain the victims of the situation arising from unresolved nature of the Jammu and Kashmir dispute.

The spokesperson urged India to refrain from taking unilateral measures and resolve differences through constructive engagement with a view to transitioning from conflict to cooperation.