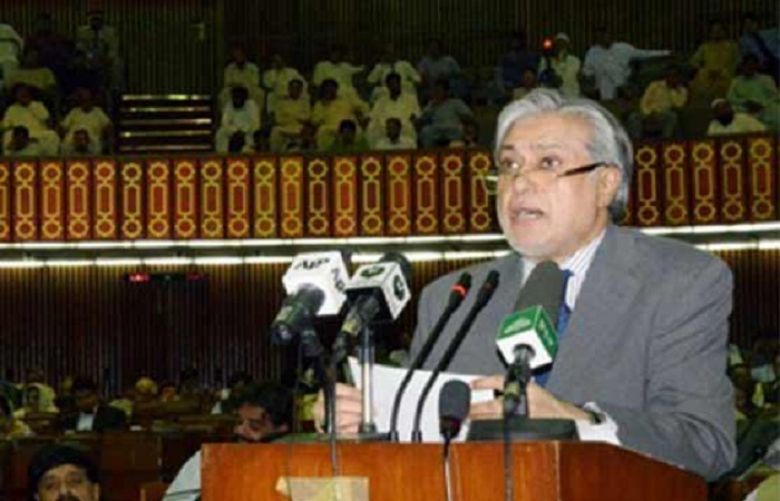 Moreover, non-tax revenue target is going to be Rs 960 billion.

According to the budget document, the total volume of the budget is going to be Rs 4394 billion.

The allocation for Defence is going to be Rs 860 billion, increasing the defence budget by Rs 160 billion.

The fears that loomed large over Pakistan s economy in 2013, when we had taken over the government, are gone now.

Pakistan s economy is seen to be having a great potential for growth and improvement.

60% increase has been recorded in the tax-collection during the last three years and this is a historical improvement.

Exports remained low this year in terms of revenue but the biggest reason is that the commodity prices have dropped internationally.

Interest rate is at the lowest in last several years with just a rate of 5.75%.

Current account deficit has remained at 1% during the last one year.

The tax-collection target of Rs 3104 billion will have been achieved by the end of June 2016.

Energy has been our government s top priority ever since we took over power.

Dasu Dam and Bhasha Dam will continue after March 2018 as well.

According to Pakistan Social and Living Measurement survey, the poverty ratio has dropped to 29.2% in 2016.

With Universal Service Fund, telephone and IT will reach regions of Balochistan and FATA with Rs 2.43 billion, while Rs 9.52 billion will be spent on already running projects.

Institutes for women have also been provided with computer labs.

Development budget has always been reduced in order to bring stability in the budget but the current government has increased it to Rs 800 billion in Budget 2016-17.

A comprehensive strategy has been devised to improve public-private sector in development projects.

15000 Mega Watts will be added to the national grid with the help of these dams and other water projects.

Funds will also be allocated for small dams in KP.

Pakistan has the ability to link the entire region through roads.

Rs 188 billion have been allocated for construction of roads, bridges, which is 18% more than the previous budget.

Lahore-Karachi Motorway among these projects is on the top priority for the government.

Foreign and private investment is also expected next year in this fiscal year.

10% increase in salaries announced for the government employees.

Federal govt pensioners of age more than 85 years to get 25% increase in pension.

Pensioners from former East Pakistan currently have Rs 2000 pension, it is being increased to Rs 6000 now. Pay scales from Grade 7 to 14 raised.

Operation Zarb-e-Azb has been of great help to improve law and security situation in the country while foreign investment has also increased.

This was possible only due to the sacrifices of the army.

Pakistan is exporting much less than its potential.

Government had announced many projects for this purpose in previous budget.

Many of the projects have already been completed.

We are annoucing new projects in this budget as well.

Fertilizer costs have been reduced during the last few months.

Government reduced the cost of fertilizer bag from Rs 2050 to Rs 1800 and Rs 50 will be reduced further.

Federal and provincial governments will contribute equally in this reduction as well.

Government has decided to reduce the price of electricity for agriculture sector to Rs 5.33 per unit.

Custom duty also being reduced from 5% to 2%.

7% sales tax on pesticides has been abolished.

The duty for crab and prawn food is 20% but this duty has been abolished this year.

Custom duty on import of samll fish was 10%. It is being abolished.

Custom duty on machinery and raw material currently has 5% custom duty, it has been reduced to 3% now.

Cottage industry turnover is Rs 5 million now for the exemption of sales tax.

The bar is suggested to be set to Rs 10 million now.

LED lights currently have 20% duty, it is being reduced to 5%.

Custom duty on import of solar panels is 0% right now, the policy has been extended till June 30, 2017.

PM Health Insurance Scheme has been started in cooperation of provincial and federal governments.

Insurance cover is being provided to poor people and Rs 9 billion have been allocated for it.

Currently the scheme is for 23 districts and it will be expanded to more districts in future.

Hospitals will get low interest loans under this scheme.

10% capital gain tax to be imposed on selling property within five years.

Corporate tax ratio to be fixed at 31%

Taxes to be imposed on showing foreign TV dramas and serials in Pakistan.

Super Tax to remain intact for another year.

Customs duty on import of eggs, chicken raised from 6% to 11%.

Customs duty on dry milk raised to increased by 45%.

Faisalabad Chamber of Commerce and Industries Chairman says that the government has helped the businessmen a bit on some issues.

He appreciated the government s allocation of budget for higher education.

Jamaat Islami chief rejects the budget, says the only thing cheap in the country today is death after this budget.

He added that increasing the minimum wage by Rs 1000 was boasted off as if the government was doing a great favour to the nation.

Karachi Chamber of Commerce leader Siraj Qasim Teli says it was a budget for the agriculturists and there was nothing good in it for the industries.

Opposition Leader in NA Khurshid Shah says the budget has nothing for the poor.

He added that the farmers were given no support for improvement in cotton production despite the fact that it was the major reason for decline in exports last year because it was the major player in textile industry.