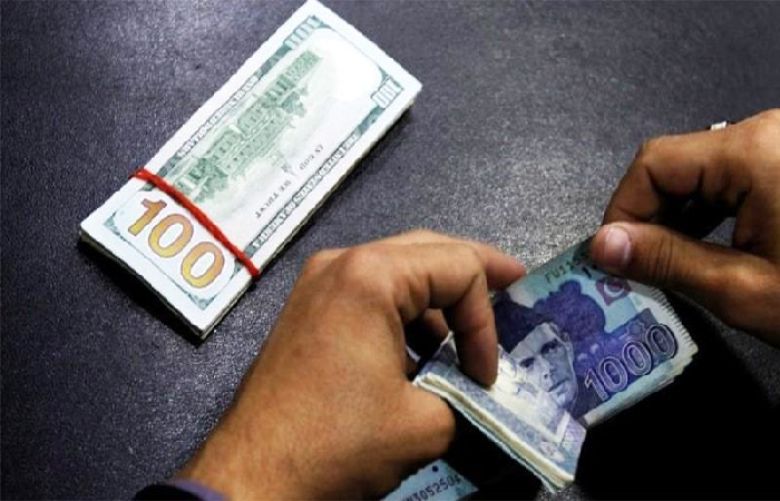 The US dollar continued its upward march on Monday as it rose above Rs210 against the local currency during early morning trade in the interbank market.

According to the Forex Association of Pakistan (FAP), the rupee depreciated sharply by Rs2.55 to hit an all-time low of Rs210.3 against the dollar from Friday's close of Rs207.75. In the open market the greenback was trading at Rs212 as of 10:30am.

Saeed Bin Naseer, director of Mettis Global said that the rupee remained under pressure on the first day of the week due to the news of banks running out of dollars over the weekend.

"The dearth of dollar at banks resulted in low or negative swap premiums as the country’s foreign exchange reserves continue to run dry," he pointed out.

An announcement from the IMF regarding the revival of the loan programme or updates on inflows from China could help stablise the exchange rate, Naseer added.

According to Mettis Global — a web-based financial data and analytics portal — the rupee incurred a colossal loss of Rs6.4 during five consecutive sessions last week.

Market experts, it said, have called for the government's immediate attention over the depreciating rupee with respect to curtailing import bills through cutting unnecessary expenditures, warning that otherwise, in the absence of the deal with the International Monetary Fund (IMF), Pakistan’s foreign exchange reserves would keep depleting.

Meanwhile, Zafar Paracha, general secretary of the Exchange Companies Association of Pakistan, said that the market was under severe distress but the authorities seemed to be oblivious to it. "It seems as if another condition put forward by the IMF is the devaluation of rupee because no one seems to care about it and there's silence everywhere."

He cautioned that if this trend persists, Pakistan could head towards a default like Sri Lanka. "It is extremely crucial for the government to take steps or else the country will default."

Earlier today, in a weekly overview, local financial portal Tresmark said that the rupee's misery was compounded by the ultra low levels of forex reserves.

According to SBP, Pakistan’s reserves have fallen by another $234 million to close just below $15 billion. The central bank's share in these reserves is just under $9 billion.

"With almost no free liquidity, it is expected that the central bank does not have the resources to control the market," it pointed out. "With low levels of inflows and substantial outflows, especially end of June, SBP is dipping in to commercial bank’s share of reserves to square payments, resulting in low or negative swap premiums."

Keeping this in mind, it went on, there was no stopping the rupee from further losses.

"On average, it (the market) is losing Re1 every day and will only stop when Pakistan receives fresh inflows. If we were to assume that that inflow will be from IMF, then the government should focus all its resources on having IMF on board and jump the queue as we can not afford even another week [like this]," the overview added.