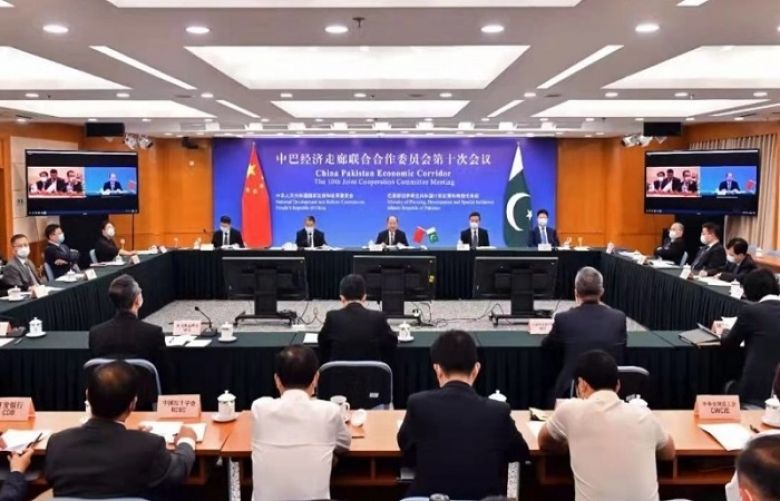 Pakistan and China on Thursday agreed to keep unchanged the tariff and tax policies relating to power sector contracts and arrest and prosecute the attackers of July 14 Dasu bus tragedy at the earliest.

The decision was taken at a meeting of the Joint Coordination Committee (JCC) of China-Pakistan Economic Corridor (CPEC). However, it could not finalise arrangements for over $6 billion Mainline Railway Track (ML-1) and a framework agreement on industrial cooperation pending for a long time.

The Chinese has been agitating build-up of power sector dues going beyond $1.4bn (about Rs230bn), creation of a revolving fund for automatic payments and an increase in withholding tax rates after the agreements were signed.

Pakistan has been seeking changes in tariff structure for independent power producers to reduce financial burden in line with tariff discounts secured from other IPPs to address the circular debt pressure.

Speaking at a news conference after the much-delayed JCC meeting, Planning and Development Minister Asad Umar, who co-chaired it, said the two sides had agreed to the need and importance of enhanced security not only for CPEC projects but also Chinese labourers working in Pakistan, following the Dasu incident. Both sides agreed to “arrest those guilty of heinous crime and get them sentenced by courts at the earliest”.

The JCC, which is required to meet twice a year, had not met since November 2019. Its earlier meeting due on July 16 was cancelled at the last moment and the rescheduled session held through video conference.

Asad Umar said the Chinese side raised the issue of security and the Pakistani side agreed that spectrum of economic cooperation was expanding, SIZs were coming up, investments were flowing in and Chinese workers were working in many areas, even outside the CPEC, and hence the need for security had also increased. He said work on the Dasu hydropower project had not resumed yet but that was not part of the CPEC.

The minister said Pakistan and China had an unprecedented and different type of relationship and all issues had to resolve in that special spirit of cooperation. He said China stood by Pakistan at every difficult time, including more than once on financial difficulties.

He said that on the directives of the prime minister, the ministries of finance and energy were to look into a clear path, whether it was through a revolving fund or some other method, to ensure payment of dues to Chinese IPPs. He said the dues stood at $1.4bn or Rs230bn as of now.

Responding to question on ML-1, the minister agreed that there was more than one issue on finalising the financial arrangement for the multi-billion-dollar project, including the combination of foreign currencies and interest rates. He said the Chinese side wanted part financing in Renminbi and part in dollar, while Pakistan wanted it mostly in dollar being its currency of international trade.

A statement by the Board of Investment (BoI), however, said it was mutually agreed by the Pakistani and Chinese sides at the JCC that “the Draft Framework Agreement on Industrial Cooperation under CPEC will be finalised and signed before the next JCC meeting”. It said that “Framework Agreement was initiated by the Board of Investment and it was shared with the Chinese side after fulfilling all codal formalities in November 2020”.

Asad Umar said the framework agreement on cooperation was signed between Ningbo Port and Gwadar Port, besides lease deed of Gwadar Expo Centre, during the meeting.

A memorandum of understanding (MoU) between the Karachi Port Trust (KPT) and the China Road and Bridge Corporation (CRBC) on the Karachi Comprehensive Coastal Development Zone (KCCDZ) project was also signed. The MoU will pave the way for resolution of infrastructure issues plaguing Karachi, besides fostering maritime development, and providing job opportunities through generation of sustainable economic activity based on transfer of technology to the country’s maritime industry.

Moreover, the minister said that a new joint working group on IT and science and technology was set up. He said that phase-2 of the CPEC was even more promising as it broadened the scope of cooperation and focused on industrial, scientific and technological and agricultural cooperation.