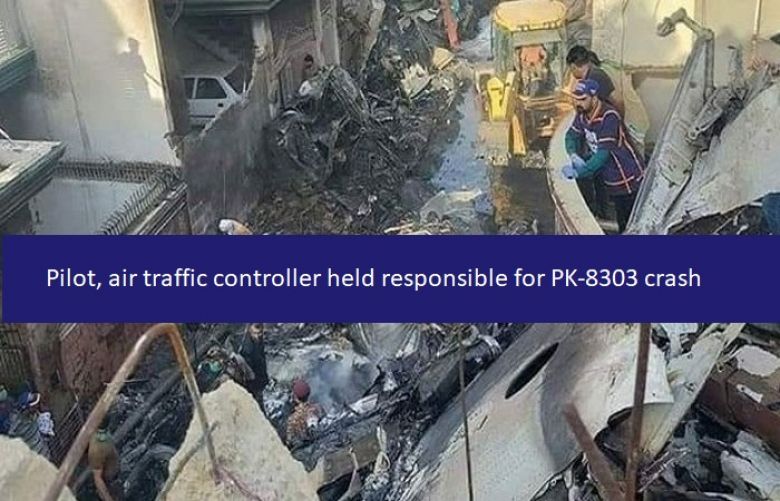 Investigators in their preliminary report on the PK-8303 crash that claimed the lives of 97 people held the pilot of the ill-fated Pakistan International Airlines (PIA) plane and air traffic controller responsible for the incident.

According to the report, the pilot of the PK-8303 did not follow the procedure and he was overconfident.

The air traffic controller is equally responsible for the incident as he did not asked the pilot to make landing instead of taking off when the engine hit the runway, the report said.

The report has been prepared with the cockpit voice recorder data, planes debris and other evidence collected from the crashed site by the probe team.

It must be noted that Prime Minister Imran Khan had asked the federal minister for aviation, Ghulam Sarwar Khan to produce the investigative report by Monday.

Ghulam Sarwar Khan had assured the prime minister of bringing forth the preliminary report and will present it to Imran Khan tomorrow, sources privy to the development claimed.

The Air Accident and Investigation Board (AAIB) commenced technical probe of the ill-fated aircraft PK-8303 plane’s debris collected more evidence regarding the crash on June 19.

Earlier on June 2, the Civil Aviation Authority (CAA) had pointed out in a report regarding ‘violations’ made by pilot of ill-fated PK-8303 aircraft of Pakistan International Airlines (PIA) which was crashed last month.

The Civil Aviation Authority’s Additional Director Operation had sent a letter to the safety department of the national flag-carrier, Pakistan International Airlines (PIA).

The report was followed by the written response of air traffic controller (ATC) and approach tower controllers which had been submitted to the investigation board on May 26 during the probe of Pakistan International Airlines (PIA) plane, PK-8303, crash incident.

It seems that the captain forgot to open the landing gear while maintaining speed and altitude of the aircraft, said the air traffic controller.

On May 22, flight PK-8303 crashed in Model Colony near the Jinnah International Airport in Karachi, killing 97 people while two miraculously survived.